This is a second post exploring the data that I collected from the IGM Experts Panel, which surveys a group of leading economists on a variety of policy questions. A CSV of all the data is available here, as are separate datasets of the questions and responses. 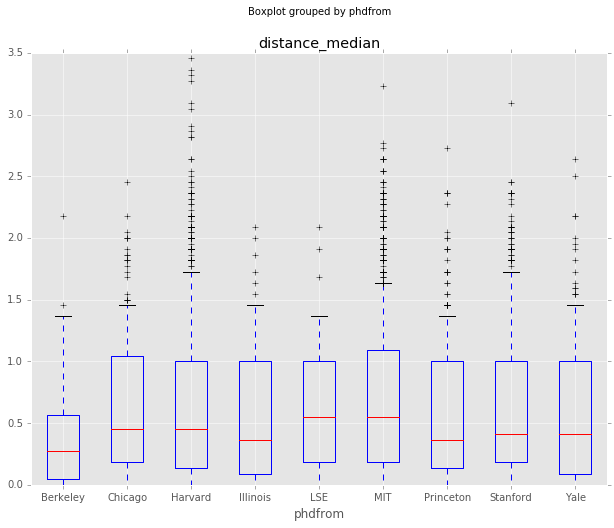 One of the interesting things that Gordon and Dahl looked at in their 2012 paper [1, PDF] was how individual characteristics of economists might influence their responses. They compiled information on each economist including the institution of study, graduation year, current university, field of specialization, gender and NBER classification. Ten economists have been added to the group since 2012, so I did my best to gather this information from their CVs and the NBER database. The final CSV of individual characteristics is available here.

Below, I join this dataset of individual characteristics with the responses data from an earlier post, and look at some of the relationships graphically. I don’t have background in economics or a very good understanding of regression analysis, so I stick to plotting trends rather than claiming statistical significance. All of the code for this post is available in an IPython notebook here

Update: A recent study [2] took a look at these data and they make a few important points. First, if the intention of the forum is to show consensus in the economics profession, this might introduce a selection bias towards non-controversial questions. Second, they do find evidence of institutional and political bias but suggest it is a result of the hiring process rather than the educational process.

Below, I load the data and process it as described in an earlier post. The main result is that I calculate a distance_median column, which is the distance from each response and the median response.

One of the interesting things Gordon and Dahl found was that economists that were educated at MIT and the University of Chicago seemed to be more confident. I find less evidence of this in the newer data, although this is just a boxplot, not a regression analysis. 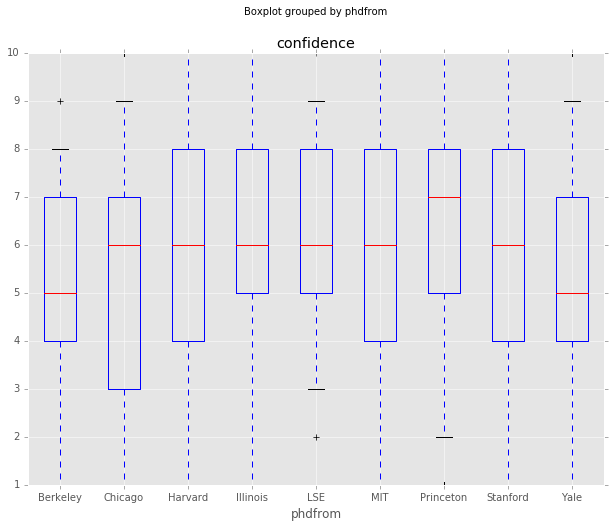 Distance from Median by Education

Another interesting thing to look at is whether any institutions produce graduates with views further from the median view. There definitely are differences in the means and medians below, but I don’t think they would rise to the level of significance because the standard deviations overlap.

It’s also important to note that the vote counts by institution vary from 2414 (MIT) to 28 (Berkeley), so these responses don’t represent the institution as a whole. 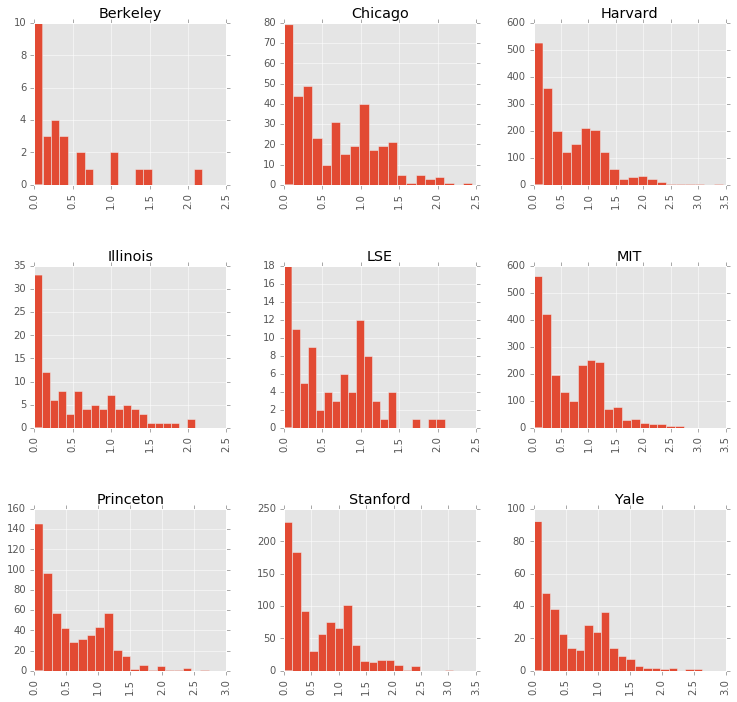 Spending time in Washington doesn’t seem to have much of an effect on confidence. Those that haven’t spent time in Washington maybe have a little bit longer tail when it comes to controversial responses, but overall both groups are very similar. 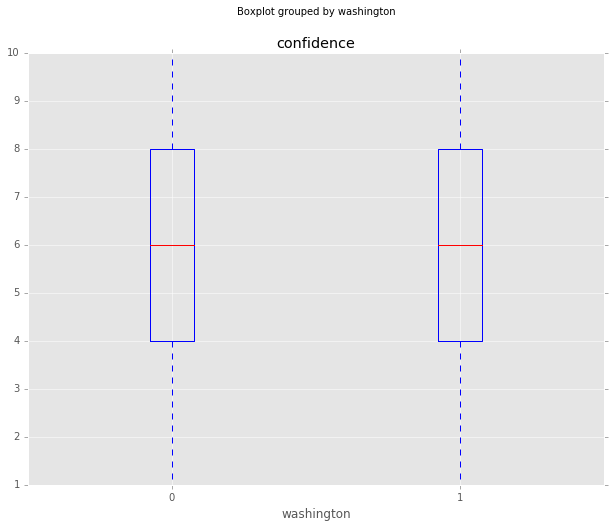 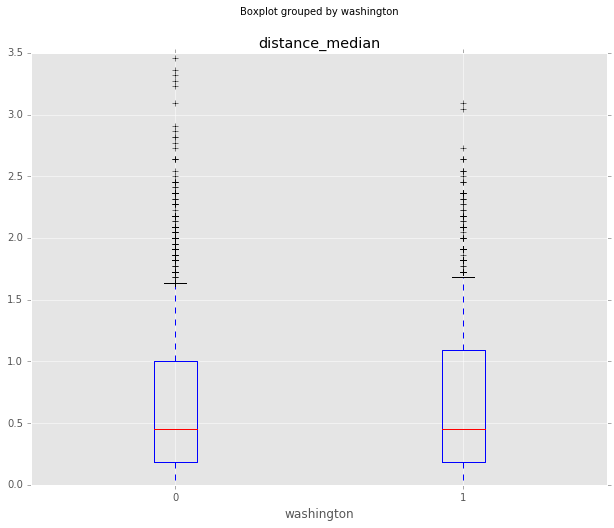 How do responses differ by field of study?

Gordon and Dahl also used the NBER classification of each economist to look at how responses changed by field of study. I do something similar below, looking at confidence and distance_median grouped by field of study. The Finance and Public Economics groups seem a little more confident. The International and Labor Economics groups seem to have a little higher distance_median, but it’s unlikely any of this rises to the level of significance. 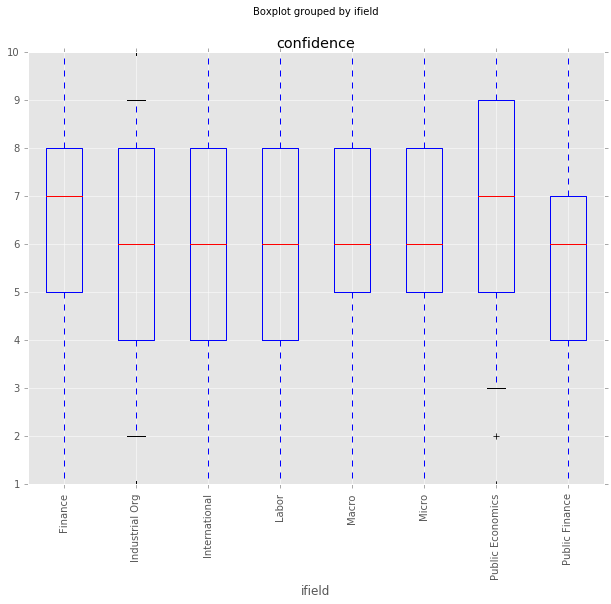 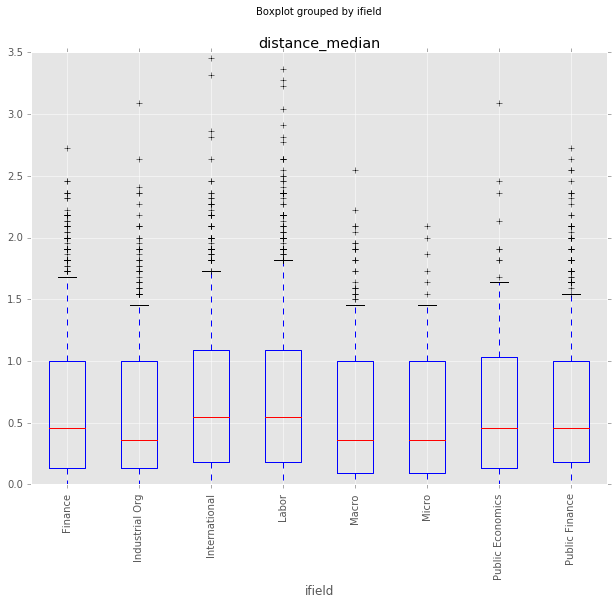 One final thing to do is look at these characteristics by age cohort, defined as years since their PhD. Confidence doesn’t seem to be too different by age cohort, but it does seem like there are more outlier responses in the older groups. Perhaps the older economists have earned the right to say controversial things? 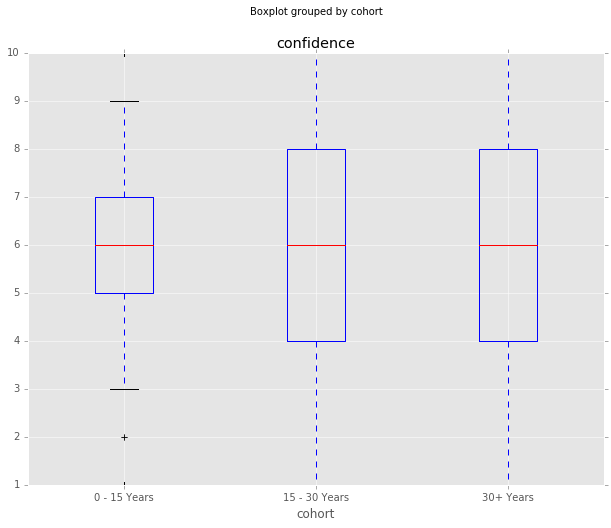 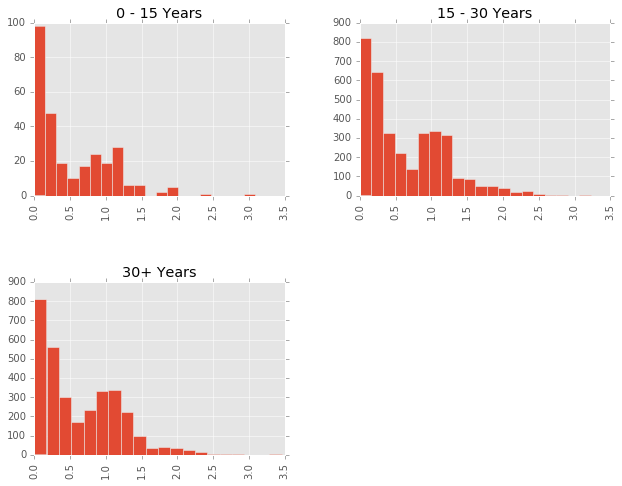 Ok, that’s it for now. There do seem to be some interesting patterns in this data, but I’m not sure if any rise to the level of statistical significance. I guess I have to learn the regression techniques economists use to say anything further.

Thanks for reading, and let me know if you have any comments or questions.